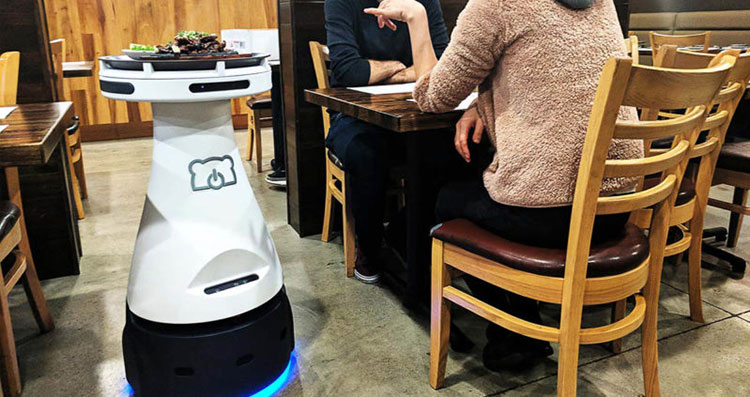 People might not want to eat in a robot-run restaurant, but what if the waiter has a robot that helps them carry your food?

BY ADELE PETERS
Adele Peters is a staff writer at Fast Company who focuses on solutions to some of the world’s largest problems, from climate change to homelessness. Previously, she worked with GOOD, BioLite, and the Sustainable Products and Solutions program at UC Berkeley.

If you order bibimbap at the Kang Nam Tofu House, a Korean restaurant in a strip mall in Milpitas, California, a robot will help your server bring the food to your table. The restaurant is the first the world to use the robot, which was designed not to replace human servers, but to act as an assistant.

“Our goal is to automate the hard part of [restaurant] work, so employees focus more on customer service,” says John Ha, who is both the owner of the restaurant and the co-founder of Bear Robotics, the startup that designed the robot.

Before owning Kang Nam, Ha worked as an engineer at Google. But he was a frequent customer at the mom-and-pop restaurant, and when the previous owner decided to sell, he invested. He got a quick education in the world of restaurant work–filling in for dishwashers and cooks and servers when someone was out sick or quit–and realized that technology could help improve the experience. He decided to build a robot and pilot it first at his own restaurant.

“I realized, why have all the manual labor?” he says. “No one’s really happy. No one’s proud of a restaurant job . . . I thought robots could bring a huge impact to society. So I decided to quit Google, started building the prototype, and now it’s running as a daily operation at my restaurant.”

The small, pedestal-shaped robot, called Penny, is designed to navigate in a restaurant’s crowded, narrow spaces, using sensors to avoid any obstacles. If a customer’s foot is in the robot’s path, the robot will automatically stop. After restaurant staff programmed in the location of each table and the kitchen, the robot made itself a map of the restaurant; now, servers use a tablet to summon the robot whenever food is ready and tell it where to go.

At the Korean restaurant, which is fairly small, there are generally two human servers working, and one robot. One person stands at the kitchen window, loading food onto the robot and prepping side dishes. The other person greets customers, waits on tables, and handles the cash register. The robot goes back and forth, delivering plates and bills.

It’s a dramatic shift from past; Ha says that servers had to adjust to the fact that they were no longer running around, and he had to reassure them that they were still being productive by focusing on customers instead. “Some servers actually walk many miles a day, even in these smaller restaurants, because they’re literally running back and forth to get food that’s ready to go to serve to another table,” says Juan Higueros, Bear Robotics COO. “This actually cuts down on that for them, allows them to interact with the people who are coming, and hopefully allows for more return customers.”

As servers spend more time with customers, the experience for customers has improved, and the restaurant says that tips have increased. Bear Robotics believes that by making restaurant work more pleasant, restaurants will have less turnover in staff. The company doesn’t aim to fully replace human servers. “Would you want to dine at a factory, or where someone with good social skills can make you feel warm?” says Ha. “Robots can’t do that.”

But having a robot on hand could make it possible for a restaurant to serve more customers with fewer people working as wait staff. If a restaurant has enough traffic for 2.5 servers, Ha explains, right now they either hire two people, sacrifice service, and push people to work harder, or they hire three people and sacrifice the share of tips each server receives. With the robot, in theory, the restaurant can have two servers, good service, and higher tips.

Because of demand for the robot, Ha plans to sell the restaurant and focus solely on Bear Robotics. The company is beginning to pilot the robot in other Bay Area restaurants–a local pizza chain, Amici’s Pizza, now has a robot happy hour for kids once a week, and a ramen restaurant that will soon open will be the first to test having multiple robots in service simultaneously. The engineers are also continuing to tweak the technology, solving challenges like how to deliver hot soup, which could spill if the robot has to stop suddenly. After the pilots, the company plans to begin manufacturing at scale.

Ha’s vision is to begin to change the experience of working in a low-wage job at a restaurant. When he started, coming from Google, he was keenly aware of the differences. He’d never had to worry about health insurance; his employees couldn’t afford health insurance, and his profit margins were so thin that he couldn’t afford to buy it for them. The robot–which employees now use for other tasks, like hauling beer from a storage area–might help reduce the risk of some injuries, while helping nudge tips higher. At his own restaurant, he says that employees feel a greater sense of pride in their work because they now feel like they’re working, in part, for a tech company.

“I hope our solutions improve the working environment for the restaurant and restaurant employees can live more like middle-class citizens,” he says. “That’s really what I want to achieve: change the way that a restaurant is operated.”