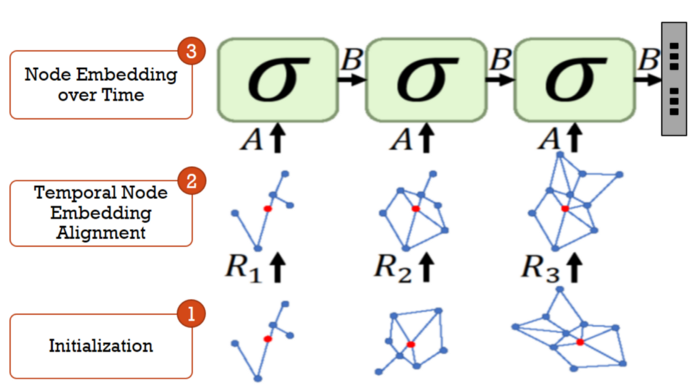 In this post I’ll take about: tNodeEmbed (joint work with Dr. Ido Guy & Prof. Kira Radinsky). tNodeEmbed is a method that leverages the temporal information in graphs in-order to create richer node embedding representations. This concept was written up as a paper which was accepted to IJCAI2019.
Let’s start talking about embeddings in the graph domain.

Embeddings in the graph domain

They are many ways to do embeddings in the graph domain:

In Figure 1 we can see that it is possible to embed the whole graph, embed each node and embed each edge (one naive way is by merging it’s two node embeddings).
All of these embeddings can be then used in-order to answer different ML questions.

The Idea behind this paper is learning Node Embedding over Temporal Graphs:

Figure 2 illustrates the idea behind node embedding over temporal graphs. We define the graph in time t to be the graph that holds all edges which appeared at any point up to time t.

In Figure 3 we can see the node2vec overview, which is simply a reduction from the graph domain to the text domain: Each node is treated as word while the ‘sentences’ are generated by sampling many random walks. Those ‘sentences’ are inserted into a word2vec model. The word embeddings outputs are returned to the graph domain as the nodes embeddings.

We use node2vec to initialize Qt. Specifically, we compute the node embeddings for all T graphs Gt1, …, GtT. The outcome of this stage is a d X Tvector per node, where T is the number of time steps and d is the embedding size (each column is a different static embedding).

For people that find this technique interesting, here’s another research by FAIR which uses the same approach for unsupervised NMT.

In the final step we merge the d X T vector of each node to a d vector using a LSTM. The LSTM is then connected into an additional layer that tries to predict a specific task is can be seen in Figure 6.

We compared tNodeEmbed to various baselines, both static and temporal, and on a various different datasets. Two tasks we experimented on are the temporal link-prediction and multi-label node classification tasks:

An interesting observation is that the lower the clustering coefficient (CC), the higher the gap between tNodeEmbed to its static baseline, node2vec.
We understand from this phenomena that the “denser” the graph, the less informative the temporal information is in-order to predict future links. The reason lies in the fact that edges tend to attach to higher degree nodes, and in “denser” graphs, these nodes have extremely high degrees compared to other nodes.

In Figure 2 we can observe the tNodeEmbed does pretty well.

Thank you for reading. Feel free to use this work or continue the research and contribute to the graph embedding community!

Previous: All presentations from the UAI 2019 event
Next: The Evening of the MDLI Course — 1+2 Cycles

Why visitors still use to read news papers when in this technological world the whole
thing is available on web?

I could not resist commenting. Well written!

If you are going for finest contents like myself,
simply pay a quick visit this site every day because it presents feature contents, thanks