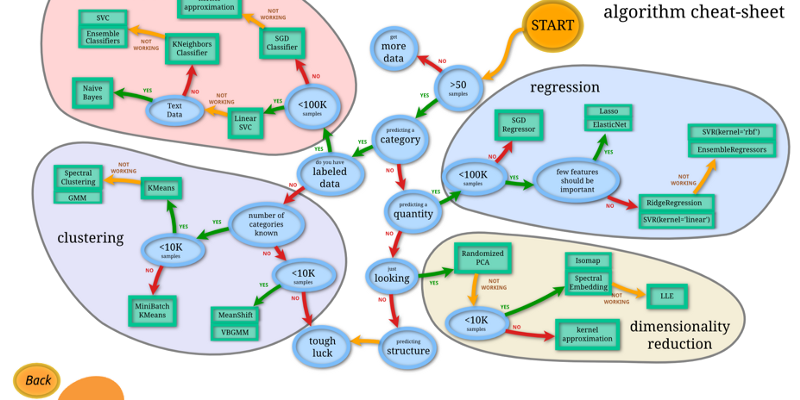 Some problems are very specific and require a unique approach. E.g. if you look at a recommender system, it’s a very common type of machine learning algorithm and it solves a very specific kind of problem. While some other problems are very open and need a trial & error approach. Supervised learning, classification and regression etc. are very open. They could be used in anomaly detection, or they could be used to build more general sorts of predictive models.

Before you start looking at different ML algorithms, you need to have a clear picture of your data, your problem and your constraints.

The type and kind of data we have plays a key role in deciding which algorithm to use. Some algorithms can work with smaller sample sets while others require tons and tons of samples. Certain algorithms work with certain types of data. E.g. Naïve Bayes works well with categorical input but is not at all sensitive to missing data.

Hence it is important that you:

3. Does the data needs to be aggregated

The next step is to categorize the problem. This is a two-step process.

Now that you a clear understanding of where you stand, you can identify the algorithms that are applicable and practical to implement using the tools at your disposal. Some of the factors affecting the choice of a model are:

An important criteria affecting choice of algorithm is model complexity. Generally speaking, a model is more complex is:

Besides this, the same machine learning algorithm can be made more complex based on the number of parameters or the choice of some hyperparameters. For example,

These are probably the simplest algorithms in machine learning. Regression algorithms can be used for example, when you want to compute some continuous value as compared to Classification where the output is categoric. So whenever you are told to predict some future value of a process which is currently running, you can go with regression algorithm. Linear Regressions are however unstable in case features are redundant, i.e. if there is multicollinearity

Some examples where linear regression can used are:

Logistic regression performs binary classification, so the label outputs are binary. It takes linear combination of features and applies non-linear function (sigmoid) to it, so it’s a very small instance of neural network.

Logistic regression provides lots of ways to regularize your model, and you don’t have to worry as much about your features being correlated, like you do in Naive Bayes. You also have a nice probabilistic interpretation, and you can easily update your model to take in new data, unlike decision trees or SVMs. Use it if you want a probabilistic framework or if you expect to receive more training data in the future that you want to be able to quickly incorporate into your model. Logistic regression can also help you understand the contributing factors behind the prediction, and is not just a black box method.

Logistic regression can be used in cases such as:

Single trees are used very rarely, but in composition with many others they build very efficient algorithms such as Random Forest or Gradient Tree Boosting.

Decision trees easily handle feature interactions and they’re non-parametric, so you don’t have to worry about outliers or whether the data is linearly separable. One disadvantage is that they don’t support online learning, so you have to rebuild your tree when new examples come on. Another disadvantage is that they easily overfit, but that’s where ensemble methods like random forests (or boosted trees) come in. Decision Trees can also take a lot of memory (the more features you have, the deeper and larger your decision tree is likely to be)

Trees are excellent tools for helping you to choose between several courses of action.

Sometimes you don’t know any labels and your goal is to assign labels according to the features of objects. This is called clusterization task. Clustering alogorithms can be used for example, when there is a large group of users and you want to divide them into particular groups based on some common attributes.

If there are questions like how is this organized or grouping something or concentrating on particular groups etc. in your problem statement then you should go with Clustering.

The biggest disadvantage is that K-Means needs to know in advance how many clusters there will be in your data, so this may require a lot of trials to “guess” the best K number of clusters to define.

Principal component analysis provides dimensionality reduction. Sometimes you have a wide range of features, probably highly correlated between each other, and models can easily overfit on a huge amount of data. Then, you can apply PCA.

Support Vector Machine (SVM) is a supervised machine learning technique that is widely used in pattern recognition and classification problems — when your data has exactly two classes.

High accuracy, nice theoretical guarantees regarding overfitting, and with an appropriate kernel they can work well even if you’re data isn’t linearly separable in the base feature space. Especially popular in text classification problems where very high-dimensional spaces are the norm. SVMs are however memory-intensive, hard to interpret, and difficult to tune.

SVM can be used in real-world applications such as:

It is a classification technique based on Bayes’ theorem and very easy to build and particularly useful for very large data sets. Along with simplicity, Naive Bayes is known to outperform even highly sophisticated classification methods. Naive Bayes is also a good choice when CPU and memory resources are a limiting factor.

Naive Bayes is super simple, you’re just doing a bunch of counts. If the NB conditional independence assumption actually holds, a Naive Bayes classifier will converge quicker than discriminative models like logistic regression, so you need less training data. And even if the NB assumption doesn’t hold, a NB classifier still often does a great job in practice. A good bet if want something fast and easy that performs pretty well. Its main disadvantage is that it can’t learn interactions between features.

Naive Bayes can be used in real-world applications such as:

Random Forest is an ensemble of decision trees. It can solve both regression and classification problems with large data sets. It also helps identify most significant variables from thousands of input variables. Random Forest is highly scalable to any number of dimensions and has generally quite acceptable performances. Then finally, there are genetic algorithms, which scale admirably well to any dimension and any data with minimal knowledge of the data itself, with the most minimal and simplest implementation being the microbial genetic algorithm. With Random Forest however, learning may be slow (depending on the parameterization) and it is not possible to iteratively improve the generated models

Random Forest can be used in real-world applications such as:

Neural Networks take in the weights of connections between neurons . The weights are balanced, learning data point in the wake of learning data point . When all weights are trained, the neural network can be utilized to predict the class or a quantity, if there should arise an occurrence of regression of a new input data point. With Neural networks, extremely complex models can be trained and they can be utilized as a kind of black box, without playing out an unpredictable complex feature engineering before training the model. Joined with the “deep approach” even more unpredictable models can be picked up to realize new possibilities. E.g. object recognition has been as of late enormously enhanced utilizing Deep Neural Networks. Applied to unsupervised learning tasks, such as feature extraction, deep learning also extracts features from raw images or speech with much less human intervention.

On the other hand, neural networks are very hard to just clarify and parameterization is extremely mind boggling. They are also very resource and memory intensive.

Scikit learning has put a very indepth and well explained flow chart to help you choose the right algorithm that I find very handy.

Generally speaking you can use the points above to shortlist a few algorithms but it is hard to know right at the start which algorithm will work best. It is usually best to work iteratively. Amongst the ML algorithms you identified as potential good approaches, throw your data into them, run them all in either parallel or serial, and at the end evaluate the performance of the algorithms to select the best one(s).

And finally, developing the right solution to a real life problem is rarely just an applied mathematics problem. It requires awareness of business demands, rules and regulations, and stakeholders’ concerns as well as considerable expertise. In solving a machine problem, being able to combine and balance these is crucial; those who can do this can create the most value.

Previous: Definitive Guide to What Is a Wireframe – Website Wireframing Design
Next: Work Smarter with These Freelance Designer Tips