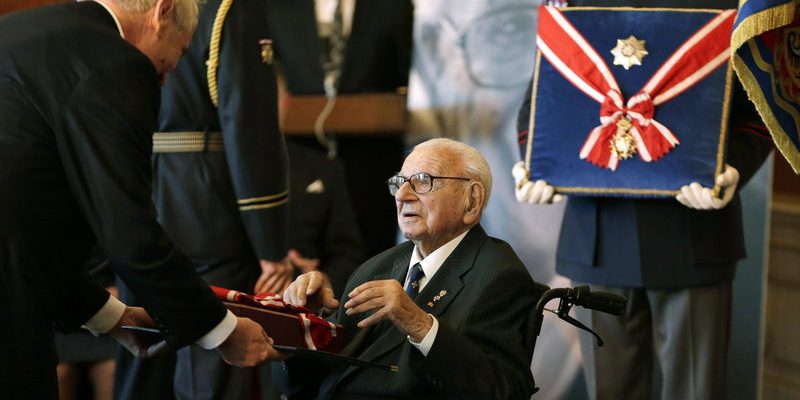 Home » Explaining of Israel » What a one good man can do

For his courage and kindness
**
This is a true story about Sir Nicholas Winton, a Jew of British descent, who organized on his own initiative the rescue of 669 children, most of them Jews from Czechoslovakia occupied by Nazi Germany, on the eve of World War II. The children were transported by special train to Britain, where they were given to foster families, and thus were saved from the Holocaust. This operation was part of the Czechoslovak Kindertransport and it took place many years ago and changed the lives of hundreds of people, but over the years it was forgotten. The story began to float in public consciousness only eighteen years ago, and since then it continues to excite everyone who hears about it.

Some years ago Greta Winton went up to the attic of her house, having not been there for a long time, if at all. You can not tell the reason for her rise, but you can not help but thank her for doing so.

Greta began moving things until she encountered something that puzzled her and aroused her curiosity. There were all sorts of boxes with notebooks full of written notes in her husband’s handwriting, along with dusty folders labeled with names.

She immediately turned to her husband Nicholas, who eight years earlier, when he was 71, had been admitted to the Order of the British Empire for his work for the elderly. Nicholas tried to dismiss her with nothing, and only after Greta insisted did he tell her that all these things were connected to something he had done in his past, or rather, some fifty years before.

Greta continued to plead, and Nicholas said, without showing off or admiring too much. At the end of 1938, a few months before the war broke out, when he was 29 years old, he went to Prague on his way to a ski holiday in Switzerland. By chance, he learned of the thousands of Jews who were trying unsuccessfully to escape the German threats. Winton immediately relinquished the ski vacation and began a private, private activity, which included a one-man rescue mission to help as many Jewish children as possible escape.

In order to convince the British authorities of the existence of the organization he had invented, Winton used the stationery of an organization that dealt with the refugees, added the title “Children’s Department” and his name as head of the department. “I mean, did you manage to operate with a slight thermal?” This question was asked in one of the many interviews that took place in the press and television, after his actions were discovered, thanks to his wife. “You could say that-” Winton agreed, smiling mischievously. The Children’s Department operated from a small office in central London. Winton’s mother and a team of volunteers worked there. During the day, Winton worked on the London Stock Exchange and in the evenings fought the British bureaucracy. To get the children out of Prague, he had to find British families who would take them. He distributed the children’s photographs, and since the British authorities had delayed the issuance of travel permits, he began to forge such permits. In addition, forced to exert some monetary extortion. “If so,” he was asked, “did you fake and blackmail?” “I succeeded, it was the only thing that mattered,” he said.

He took the first twenty children out of Prague the day before the German invasion of Czechoslovakia. Even after that, the Germans still allowed Jewish children to leave. This was in line with the “cleansing of Europe from Jews” policy. The decision on the “Final Solution” will come only three years later. Winton continued the rescue operations right up to the last moment. The train, which was no longer on its way, was arrested on 01/09/1939, the day World War II broke out. The children who were on her stayed in Prague, and presumably murdered.

During the war, Winton volunteered as an ambulance driver of the Red Cross, married, raised children, and told no one about what he had done before the war. When asked why he had kept this secret for so long, he replied, “I did not keep anything secret, I just did not talk about it.”

For decades the story was kept secret until Greta discovered the notebook in the attic. None of the children had any idea who actually saved them and exactly how it happened. Greta turned the information to Elizabeth Maxwell, then Robert Maxwell’s wife, who promoted the story and distributed it. The BBC channel produced a film, in which the story was told. At the end of the film, they told Levonton, in light of the cameras, that the woman sitting next to him was one of the survivors. The excitement of the two embraced intensely a few moments later when the hostess of the event asked that anyone who had been saved by Winton would stand up. To the astonishment of Nicholas Winton, everyone present was on their feet. He turned and saw the results of his actions, his heroism, his generosity and the unique initiative he had taken decades before.

All these people, 669 in number, established families, raised children, and now they have grandchildren and great-grandchildren. When interviewing some of them and their family members it is impossible not to think of the saying “Whoever saves one soul… as if saved a whole world”.

One survivor wrote a book about him: Nicholas Winton and the Rescued Generation: Save One Life, Save the World: (For purchase on Amazon)- https://goo.gl/XtgmZv

And another book that his daughter wrote: (For purchase on Amazon)- https://goo.gl/aNe5CW

The website dedicated to him bears the name – the power of good: http://www.powerofgood.net

“If something is not impossible, there will probably be a way to do it,” said Winton when he told about his actions. His modesty and courage continue to inspire anyone who hears about them.

This is the story of the goodness of one man who has managed to defeat some of the evil of many people.

Previous: Launch of the silver baltic giant
Next: Making history at Ramon Airport